If you want to transform into superheroes, but your smartphone does not allow too high configuration. Or you want a more simple and funny experience. Definitely, Stickman Battle: Fighting game is a perfect choice I will recommend to you. Inspired by dramatic superhero and villain battles. Now we will see a different look of Superman, Spiderman, that you used to love. The simple stick figure is funny but not trivial at all. In return for you the most spectacular and classic battles between heroes. Also, improve your ultimate fighting skills.

True to the introduction, superheroes will now be in the form of stick people. Although they look simple, their power is still unmatched and terrible. No one can match. And even more surprising is that you will use them in hand-to-hand battles. As we all know, stickman games require careful technique and strategy to win. Of course, Stickman Battle free game is not out of that scope. You must possess the most intelligent techniques and handling to prevail in each battle. 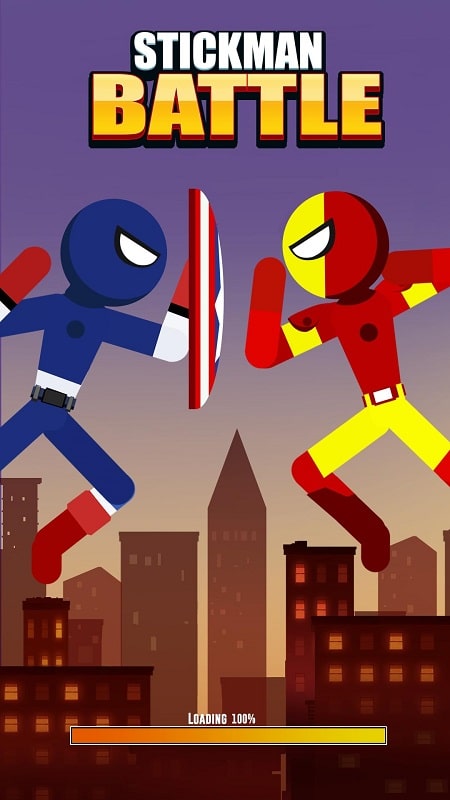 Stickman Battle game free gives you a bunch of superheroes from many different hero universes. It’s not easy for you to get to know all those superheroes. But surely you will recognize most by their strength because the special point is that the power of superheroes will still be preserved in this game. Stick people will no longer fight with pointless punches and kicks. We can use our superpowers. Shoot lasers from the eyes have super strength or super speed… All create the fanciest and attractive stickman arena you will ever experience.

Control the hero with Joystick and other buttons on the screen. The battle will be one-on-one with other enemies of your choice. The combat mechanism will be quite similar to reality a bit. If you deal damage in the enemy’s head area, it will deal a critical hit that deals massive damage. If we cause wounds in certain parts, it will also cause great damage when we attack them again. Taking advantage of this mechanism makes it very quick to defeat enemies with just a few simple attacks. Enemies can also do that to you, so be careful. 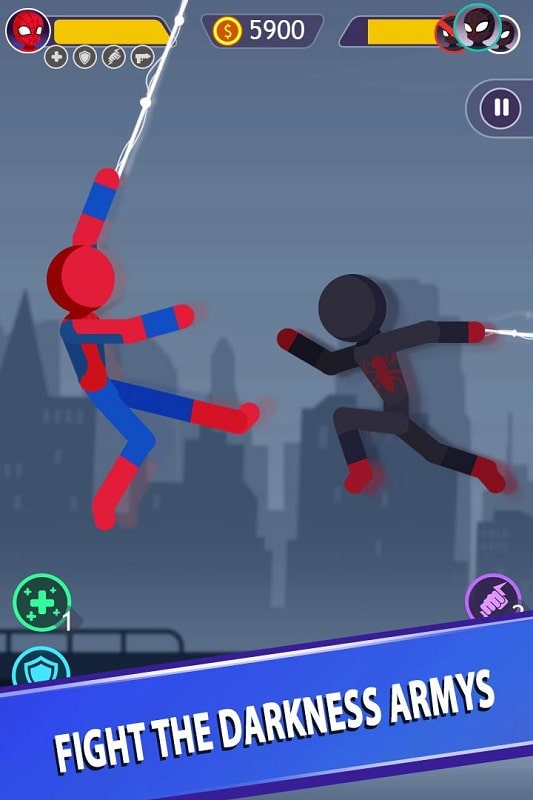 Explore through many levels

The game will span many levels with increasing difficulty. Each level will let you confront any opponent. Sometimes a hero, sometimes a villain. They carry the full power of that hero and villain without any restrictions. That’s why you have to be very careful with Superman, Batman, Joker… They carry a hazardous characteristic of supernatural power. A guy who just entered the school like you has the strength to defeat them? Unless you are an anonymous master and can handle them with the most common attacks. That wasn’t easy compared to upgrading his strength with many technologies. 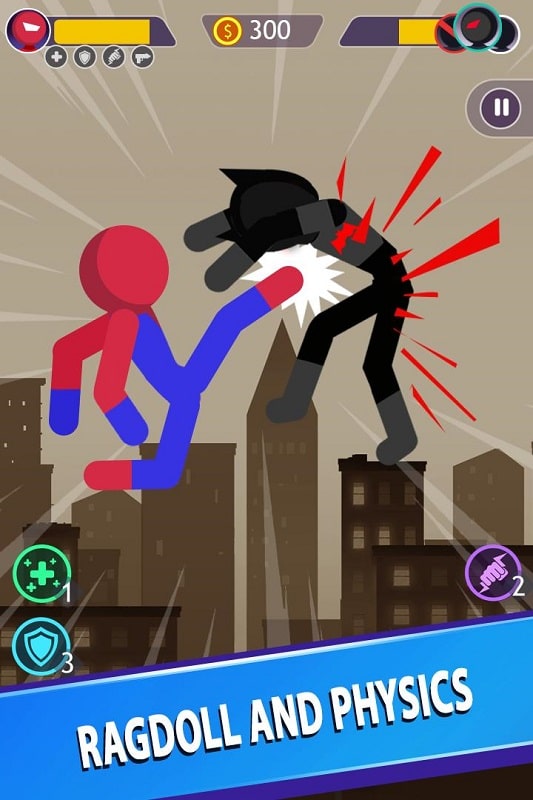 Through many tough battles on the battlefield, you can accumulate a sufficient amount of money when winning. Expand your hero inventory by unlocking more new heroes. Then take it to the battlefield to get used to your new power. Sometimes it takes time to get used to it. Because each hero will grow in strength through many different button combos, for example, Superman’s super-strength will have a different combo than firing a laser. It takes a long time to learn and master all the skills. However, it is not extremely difficult. You can still pass if you practice hard.

That said, compared to the invincible power of heroes or villains, weapons are only supportive in many urgent cases. However, it should still be used in many special situations, especially when facing enemies who can counter the heroic power. Weapons here are swords, tridents, spears, hammers, and maces. Each item brings its own damage and effects. If combined with a hero who has a knack for using that weapon, it will be perfect. With the right combination, you can finish off the enemy in just a few hits. In addition, weapons will fuse with skills to create the ultimate attack. Provided that you have to create your own. With just a few simple steps to own heroes. Then there is a long process of training and building strength. Stickman Battle game free takes you through every process to become the number one hero. Confront any hero or villain in the world. Show your strength through many different ways of fighting. Stickman Battle: Fighting game mod is a fighting game that needs a strategy to play. 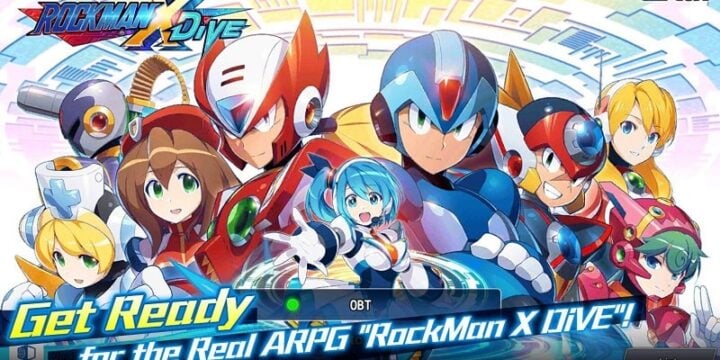 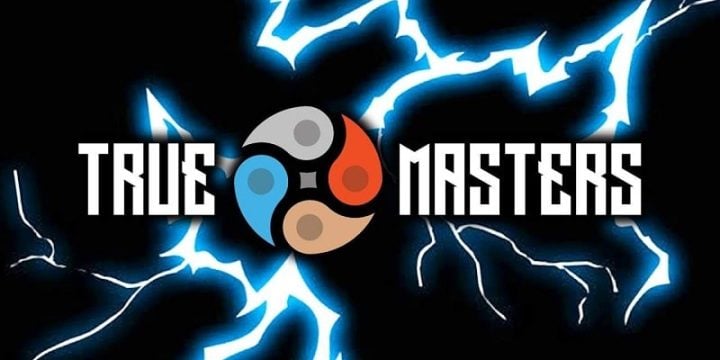 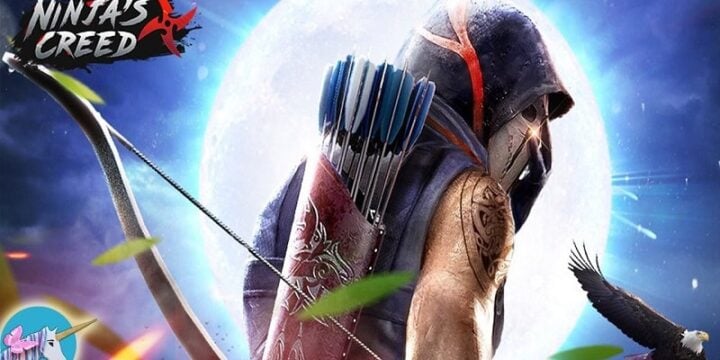 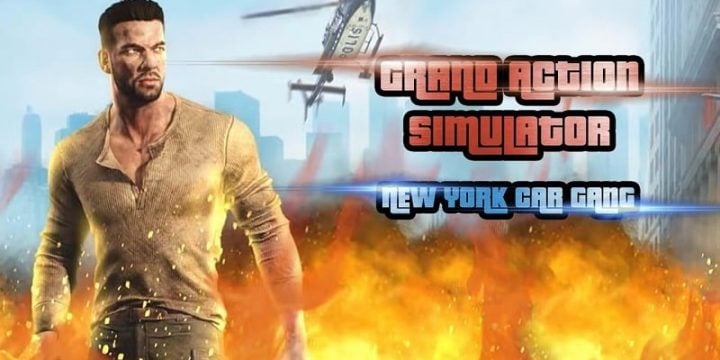