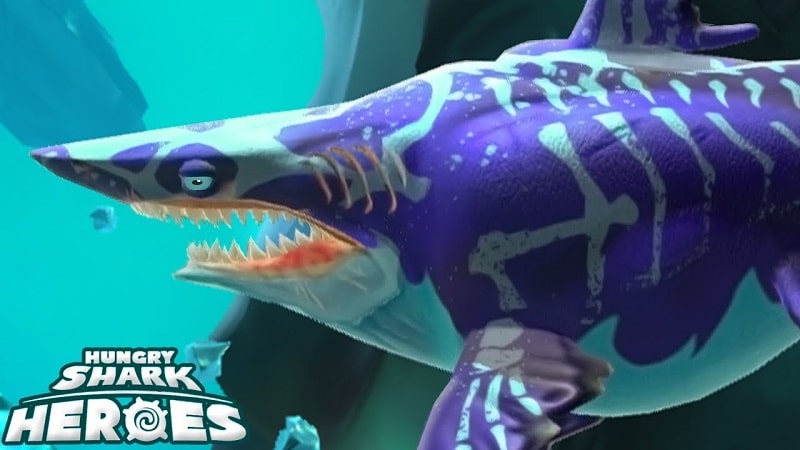 Of all the fish, sharks are the most famous for their aggression in the ocean. They possess sharp teeth and strong bite force enough to frighten us. Smaller fish are all reluctant to come face-to-face and become a meal for them. The strength of the shark is unmatched and represents the power of the vast ocean. Are you also a lover of the strength of these sharks? So try downloading Hungry Shark Heroes to devour other small fish and become the king of the ocean.

Following the success of Hungry Shark with a strong appeal that created a fever in the mobile gaming market. The producer has continued to release the next version, Hungry Shark Heroes. A vast ocean where there are beautiful coral reefs on the deep sea floor. This is a great breeding ground for the most dangerous sharks in the ocean. Raise your sharks by eating all the creatures around you. Become the champion in this vast ocean. With great 3D graphics and images with sharp details. Promises to bring you an unforgettable experience. Helps you relax after a period of intense activity. 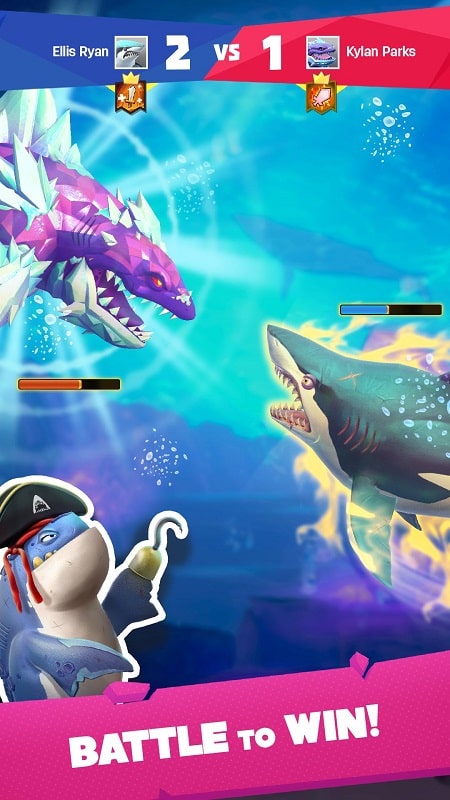 Coming to the deep ocean in Hungry Shark Heroes you will become a shark. Your job is to eat all the creatures around to become bigger. Once you get big enough, you will be able to sweep away creatures that are smaller than you. The controls are very simple and easy to understand. Just control your shark with the on-screen joystick so that it can move as you like. When approaching prey, fish will automatically eat them and accumulate points for themselves. The more fish you eat, the more you will grow in size and become stronger. At that time you can eat the large sea creatures from before and become the ruler of the ocean. 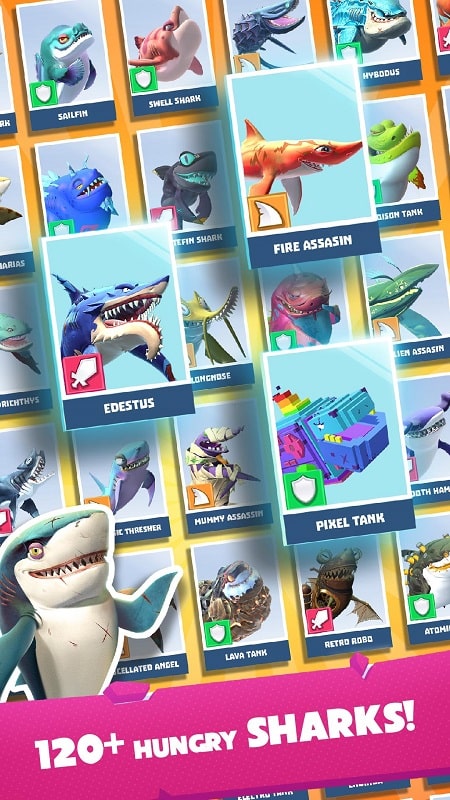 If you are passionate about sharks, then you will not need to worry about the diversity in Hungry Shark Heroes. Because here there are more than 120 sharks with many different styles and strengths for you to choose from. Find the most powerful and satisfying sharks to add to your unique shark collection. To own them you need to unlock them with the money earned from the game screen. Play hard to have enough money to unlock all these sharks. Doing quests is also a way to increase the amount of money you get. Each shark will possess a special skill, so take advantage of it to hunt. Satisfy the endless hunger of the shark. 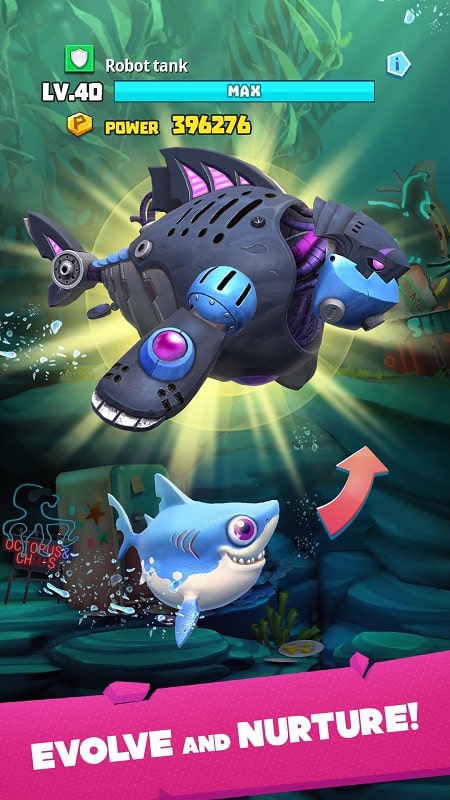 Do the ordinary sharks make you too boring? Do you want more? Hungry Shark Heroes will meet you with a shark birth feature. You can make the shark fall in love and breed a completely new baby shark. Born sharks will be the perfect combination between the two species and carry a great deal of potential. This is how you will make your collection richer. Let the sharks in your collection crossbreed create countless sharks with special shapes. Without different children, you can borrow from friends. Hundreds of sharks are hundreds of possible crossbreeds. 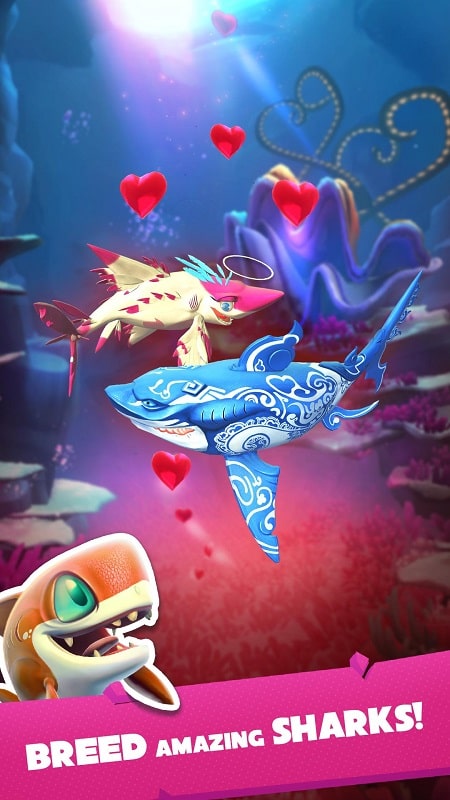 You will not have to worry that you will be alone in the ocean of Hungry Shark Heroes. Because this ocean has many competitors waiting to compete. Enter PvP mode now to fight with other players. Gather your strongest squad and go into this horrible battle. Control your shark to attack your opponent. Use up your experience and fighting skills to defeat them. A great battle between the mighty lords of the ocean. The battle between players with well-crafted strategies designed to finish off enemies with painful and sharp bites of huge teeth. 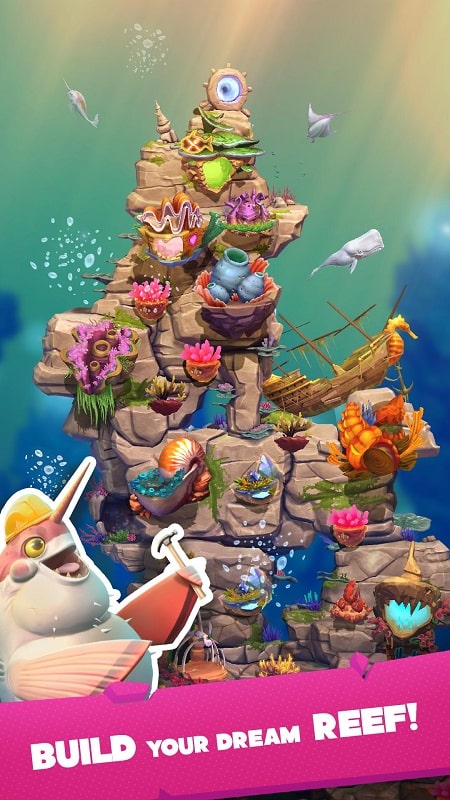 In addition to fighting, you can also relax by building a dream home for yourself. You can rearrange coral reefs into beautiful masterpieces. Create a splendid home for your sharks. Through fierce battles, you will be returned to your home. A deep-sea coral reef where the sharks have grown and become strong from here. You will witness a beautiful scene with light from day to night. Download the Hungry Shark Heroes mod to experience the feeling of becoming the strongest shark, devouring other creatures, and becoming a lord. 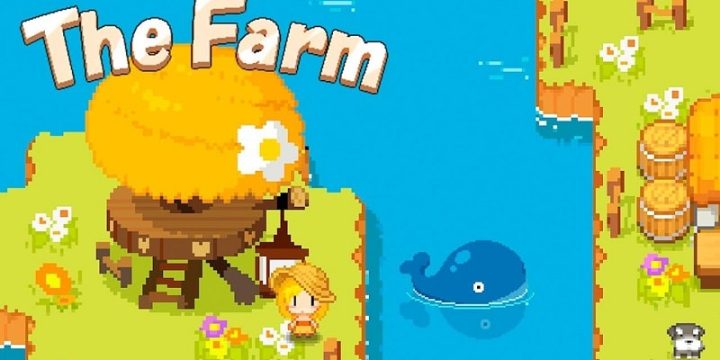 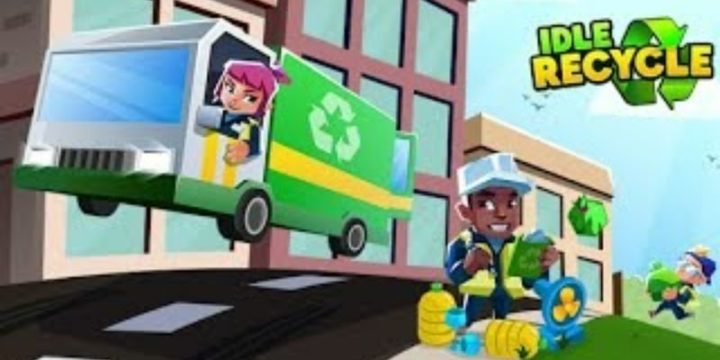 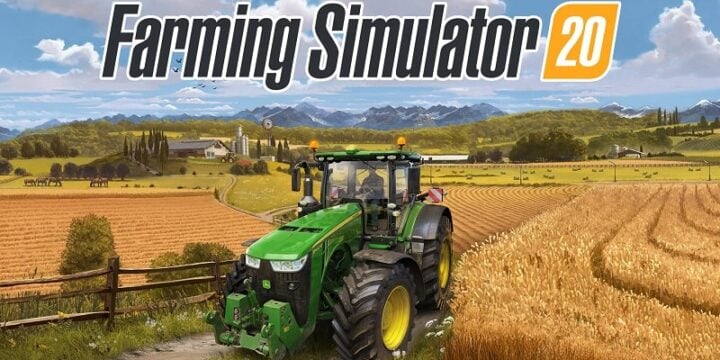 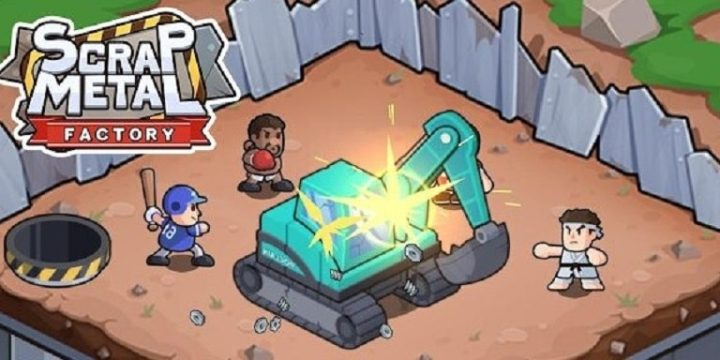 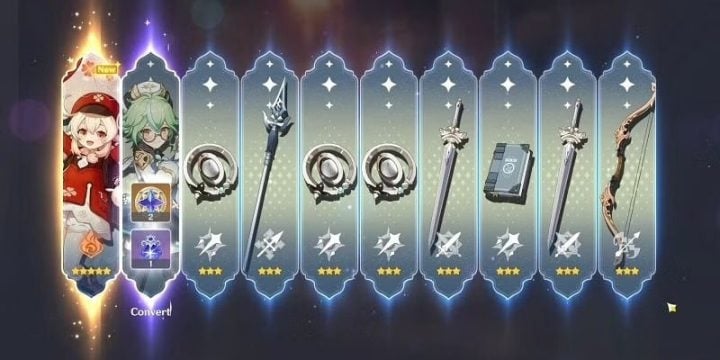