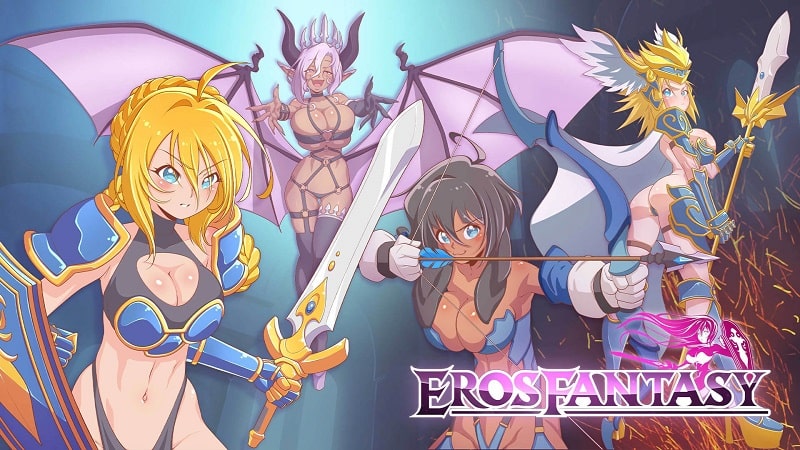 Warriors are usually the strongest men. But what if the warriors were beautiful girls. Are you moved by their beauty and bravery? Their combat skills, if compared, would certainly not be inferior to men. Let’s start the battle with the charming female warriors of Eros Fantasy. Embark on an endless magical journey to the most remote lands.

Is a game with turn-based gameplay that is popular on the market today? Bring in simple but excellent graphics. Bringing you fierce and fiery battles with powerful enemies. Legendary battles broke out unstoppable. Admire the mythical skills of these adorable creatures. Bring a sense of comfort after a tiring working day. Let Eros Fantasy guide you to the land of beautiful warriors. There you will be immersed in the fun with magical magic. Forget the worries and sorrows of the busy and hectic world out there and start a new journey. 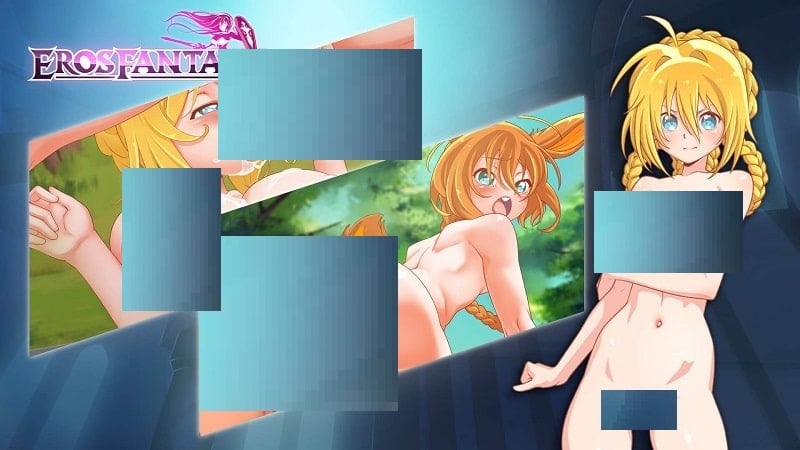 As a knight with a lot of experience fighting on the battlefield, you have taken in girls as disciples. Let’s train these girls from weak to strong. Take on this grueling combat job for yourself and begin to rest. Defeat enemies who want to invade your kingdom. Show them how painful it is to be beaten by women. Under the light of the guiding sun, evil will be blown away from this place. Return peace to the innocent people. Reward the girls generously after the grueling battles. Power them up in the next matches to be able to win even bigger. Potential warriors come from different lands to ask for your guidance. They have hot bodies and different fighting styles. Carry within you the determination to glorify your homeland. Become the best warrior of this kingdom. Arrange a team of the best warriors for you. Choose the right girls with high fighting ability. The more stars they have, the greater their ability. A squad full of elements will become an undefeated force. Defeat the most numerous enemies with your strength. Reach the pinnacle of shining glory. 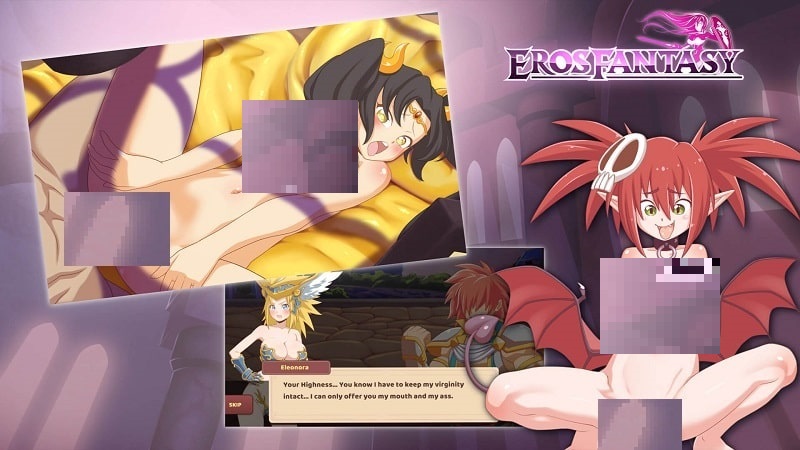 One of the factors that make the game Eros Fantasy is a good story. Without the plot, the game will become bland and unattractive. The plot is full of magical colors of fairy tales. Magic spells that can make dreams come true. Mythical creatures appeared to communicate with humans. The never-ending adventures of the knights. All for a good purpose, which is to protect this land. Discover the sources of strength hidden deep within people. The bad guys will pay for what they did here. Well-deserved rewards are given to the most talented, kind-hearted people. 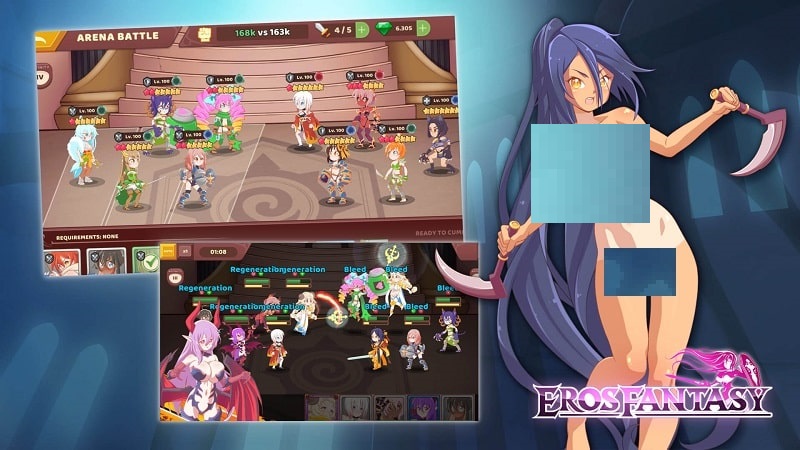 The glorious arena always welcomes the strongest warriors. This is the gathering place for online players from all over the world. This is the place where you can test your skill level. Come up with unique battle strategies and defeat your opponents within a certain number of turns. Your opponents are also not average, and they are also full-fledged experienced players. To win against them requires you to be much better than them, along with a strong squad. Your squad can also effectively counter the enemy if you catch the weak points. Defeat them and win precious rewards from the arena and upgrade the squad. 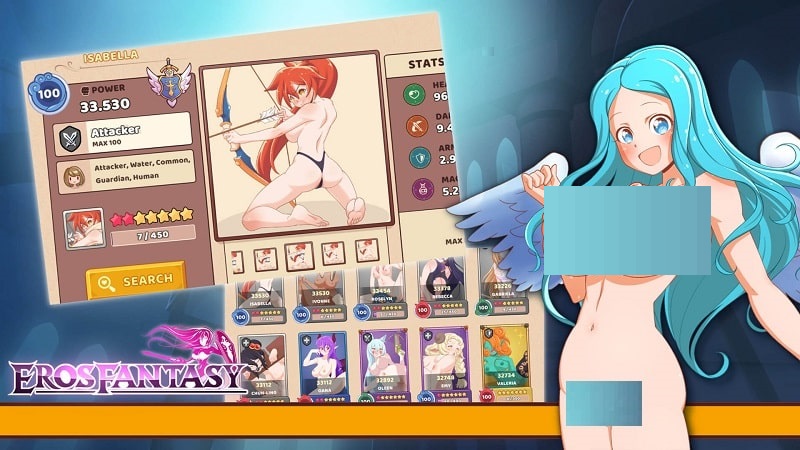 Events will be held a lot in Eros Fantasy. If you are a player who cares about plowing, you can participate in these events. Bring back extremely valuable and filling gifts. Great bargains with low prices and big deductibles. Earn good items to increase the strength of your female warriors. Help your leveling process be accelerated rapidly. Take advantage of events to bring you great joy in life. Download Eros Fantasy mod lead charming female warriors to fight formidable enemies. Create the rewards they deserve. 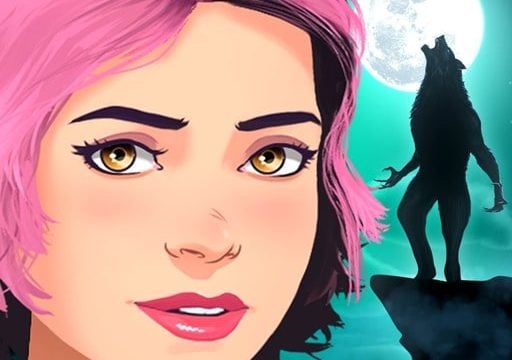 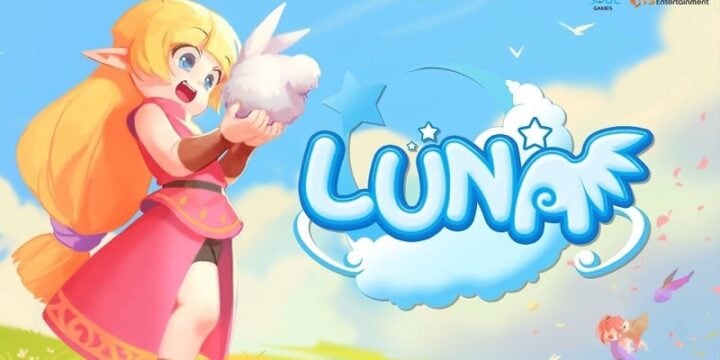 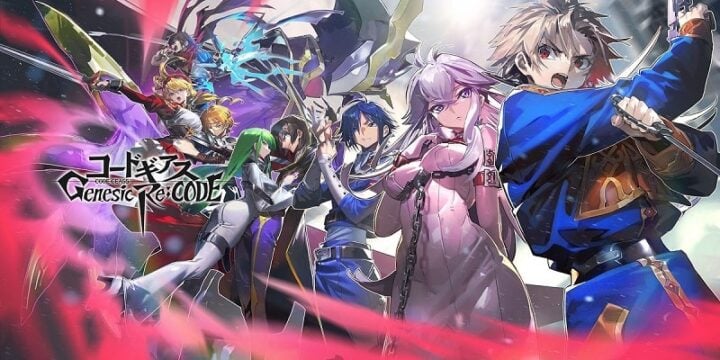 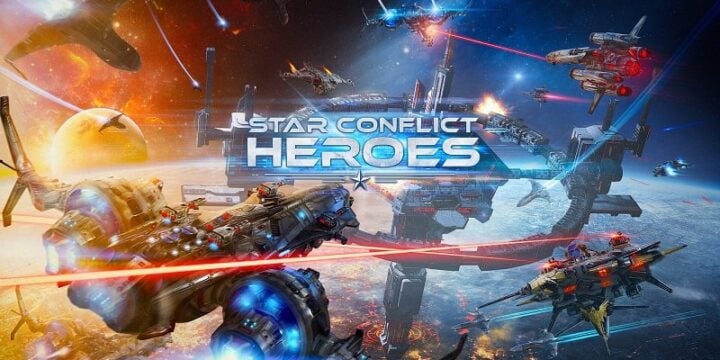 Hi, can somebody please update this app

The game and the mod works, but there is a problem with the tutorial, I cant skip it, please help

There’s a problem with the app
1st. There’s no Tuto
2nd. Neither foe nor friend takes dmg at all, so stuck at lvl1

Plz fix, n ty for ur hard work as always