Roller Ball 5 is a colorful puzzle game and gives you exciting, amazing emotions. Your job is to control the ball on the screen to roll according to the process. On this rolling road, it is necessary to collect gold coins and stars that appear on the way. In addition, you must avoid the pitfalls that appear to hinder the way you are going. The available traps also have the companionship of ugly youkai who want to eat you. Fight these bosses and save your friend trapped in the player’s cage. Collecting large amounts of gold coins can unlock the next levels and unique features you don’t own.

Opening, just move the ball forward or backward, players can feel it simple. But after experiencing heart-pounding battles, players will be attracted by the uniqueness. The player controls the red ball rolling forward and backward through the arrow on the left hand side. Also jump up or down with the up and down arrow buttons on the right hand side. Attack animals that get in the way to complete quest requirements and earn extra income. When the ball rolls to the end of the path, find the location of the magic door and pass it. That means you have completed the level and unlocked the next level. Pay attention to collect enough gold stars that appear on the way as a premise. Since it is a level game, the difficulty will be proportional to the level. But that means opening up exciting and new adventures. The arc can’t just be a straight line. There will be twists, holes, and high steps that players must pass. The system of thorny traps and abysses are waiting for you to fall. Can take advantage of objects and advantages around to find ways to avoid monsters and obstacles. A puzzle game that requires players to also apply observational and situational skills. There are pitfalls where players need to find the switch that turns off the system. Because they are a cluster of pitfalls extending across the road. 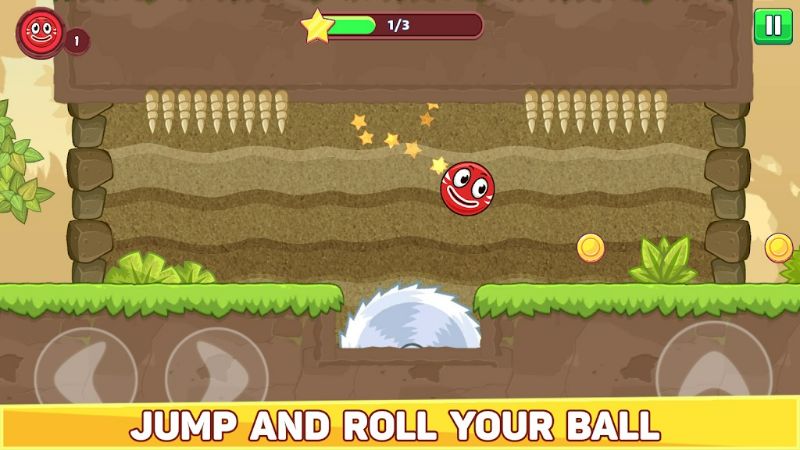 At the beginning, your character is just a plain red ball with eyes, nose, and a mouth. After earning the bonus base or unlocking the skins. Players can change the appearance of their balls to make them more unique. Gray globe with Aboriginal stripes. The ball is shaped like an orange, the ball is shaped like a blue cat’s head. Or the ball wearing a flip-flop, with translucent blue glass. The ball has a beige dinosaur egg shape and eyes with long eyelashes. Or fruit shaped balls like watermelon, pineapple, peach, etc. Lots of interesting avatars are waiting for you to open. Since there are countless levels to pass, there are also deadly traps. From pitfalls as small and simple as sinkholes, thorns grow from the ground up or the sky. There are also spikes that move up and down continuously. The blue monsters are equally dangerous. They moved back and forth, clinging to the cobwebs from the ceiling. But the cog is spinning. Just touching makes your ball hit. The monsters are full of horns, some have wings. In particular, there is a monster that also shoots green round bullets. Having a child with two arms is a ball of thorns. 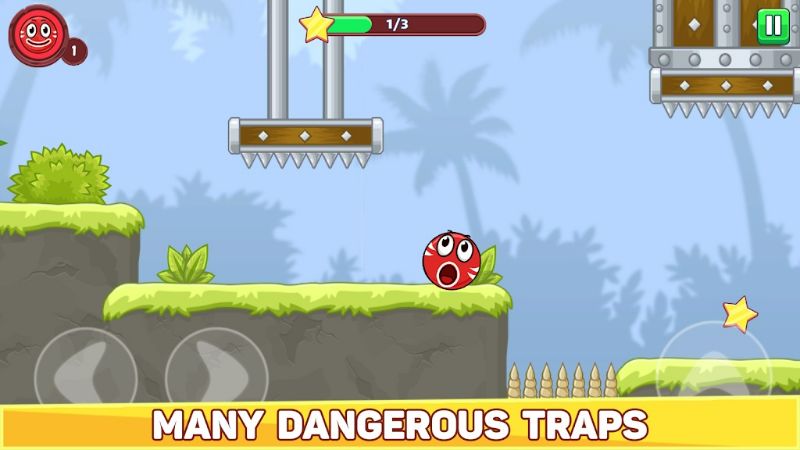 The number of levels for players to explore is up to more than 300 levels. Each level is a combination of traps, monsters, and challenges. The roads are also arranged in a variety of ways. The stars are randomly arranged and scattered everywhere. In addition, the player also has to rescue your friends from the iron cage holding them. But before that, it was necessary to destroy the monsters that stood in the way. Collect large amount of gold coins. After being rescued, you and your teammates move towards the magic door to escape. Bosses all have a lot of blood, so it takes perseverance to destroy them. 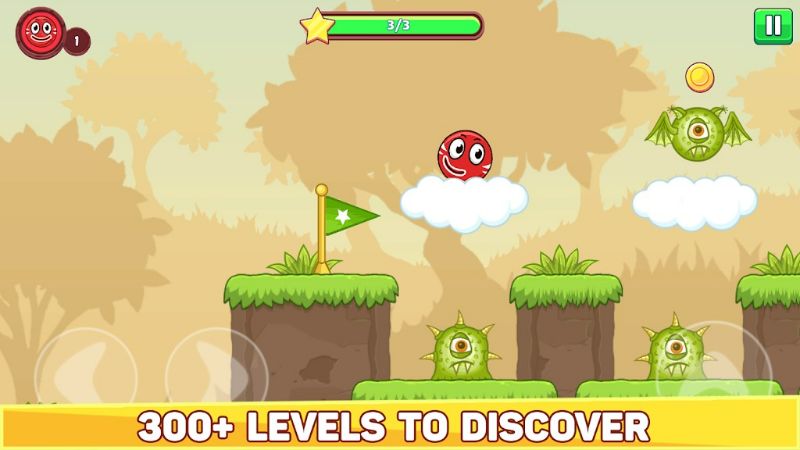 You can take advantage of times when the monster is stunned by your troublesome moves. Unleash powerful attacks that hit their most critical spot. Follow the quest bar at the top, which has a gold star at the top. When filling this horizontal bar with green, the task has been completed. Even in the case of a rescue, it’s the same, but instead of a star, it’s a red ball. Download Roller Ball 5 mod to participate in the roll of the ball to rescue your friend. 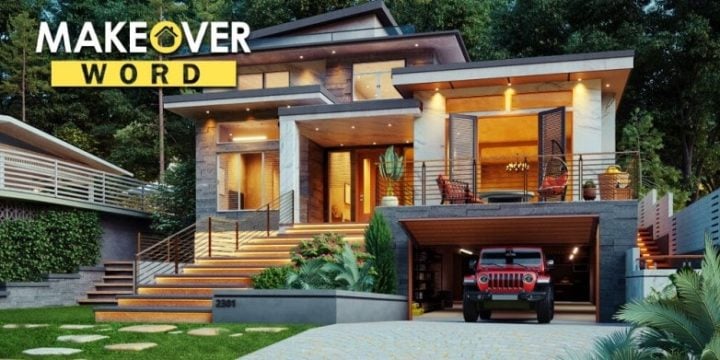 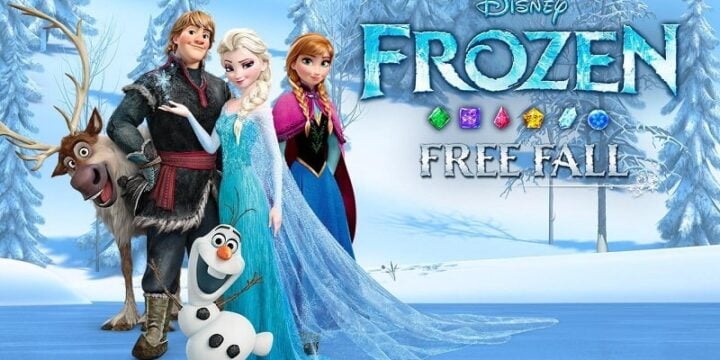 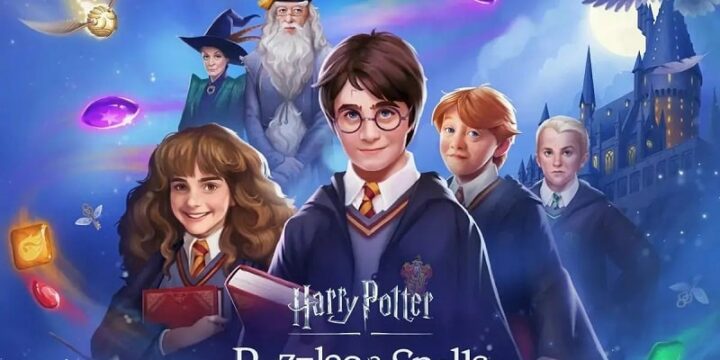 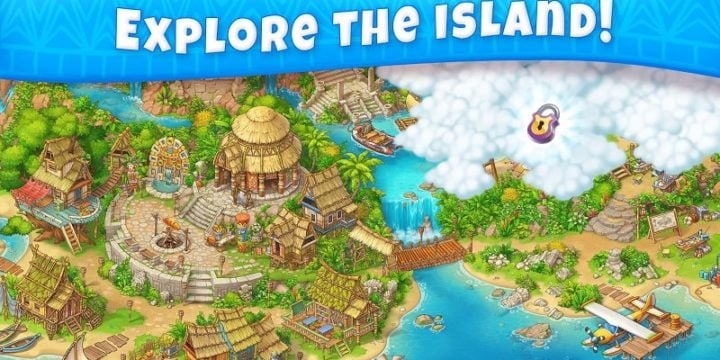 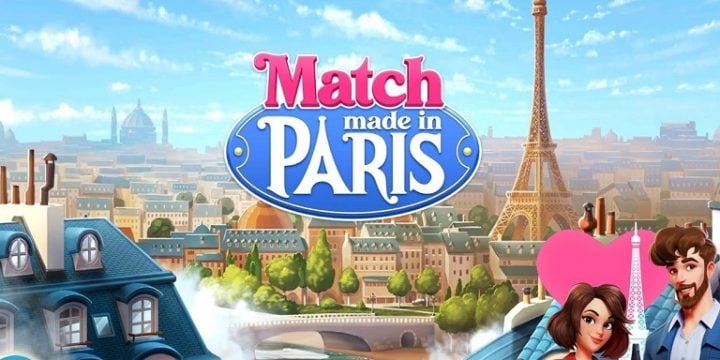